This weekend my friend Stefan photographed me doing some yoga postures. When I put the pictures on Facebook my friends started commenting about how great I looked and how they’d probably “break forever” if they tried to bend this way.

But I’m not naturally flexible or strong.

Actually, I still “struggle” in a lot of basic postures – I only posed with the ones I’m most confident look good!

However, what I can do is the accumulation of five years of on/off yoga practice. Here’s my story…

My first-ever yoga class was in September 2007. I’d finally chosen to do something about my body image issues and I’d settled on signing up for my university’s early morning Kundalini yoga sessions. I was hoping to be skinny by Christmas, because I was convinced all yogis were skinny and I wanted to look that way, too.

I remember getting to class and the teacher lead us in a basic warm up; rolling out the shoulders, wiggling the fingers and other simple things that, honestly, anyone could do.

Then we go to the postures: cat, crow, frog, cobra… I loved that they were named out of animals, but hated how damned hard they were! When we started doing sun salutations I also learned I couldn’t touch my toes. Actually, I couldn’t even touch my knees.

At the end of term I gave up. I decided yoga just was not for me, and was convinced my yoga teacher was insane. She told us worrying was not efficient, that we were being silly for stressing out over exams. I thought she was absolutely bonkers; I was paying good money to go to that university, I wasn’t about to fail out! (Spoiler: after many more years of yoga I now realise she was right; there was no point in worrying. After allI was revising for exams and doing the necessary work to achieve good marks on my projects and papers – so what was there to worry about?!)

I owned a yoga mat

But it doesn’t really just stop like that. I did, after all, have to buy a yoga mat for that first class and I wasn’t ready to write off that financial investment. At home I would unroll my mat and do my favourite postures for 15 minutes a day, nearly every day for the next year. I didn’t really know what I was doing, or what I was meant to be doing, but I thought that a little bit of stretching was better for me than no stretching at all.

After about six months of this I was finally able to touch my toes.

By now it’s January 2009 and I’ve just returned from a semester abroad in London. I’ve put on a lot of weight, I’m not proud of my body or comfortable in my own skin. I decide to use my Christmas money to buy a yoga DVD.

This time I was practising  Hatha style, and the teacher in the DVD demonstrated the postures and talked through how you should be breathing or where your knee should be in relation to your ankle during the warrior postures. She had this way of speaking, as though nothing in the world could bother her, and she would talk about bringing breath and a sense of humour to stressful situations. I deemed her a mentalist, but yet I kind of wanted to know her secret and if she was always this peaceful and calm.

I was also still really struggling with the postures in her sequences. I’d fall and lose balance a whole lot during the 60 minute long video, but I decided that I wouldn’t go to a studio until I was more confident in the postures. I was terrified of embarrassing myself.

Time to get serious

A year and a half later, in September 2010, I moved to London. By now I knew that yoga DVD by heart so I moved without it. I also decided to sign up for classes again.

This time I chose Ashtanga Vinyasa, Iyengar and Hatha. My university’s fitness centre offered all three regularly as drop-in classes for students. They were all rated as beginner/intermediate/advanced, but I decided to ignore this and go to whichever one was best for my schedule.

For the next year I challenged myself to go 2-3 times each week. I didn’t see much flexibility improvement, but I noticed I was becoming a lot stronger, my muscles were more toned and my balance had improved immensely. I also started learning the inverse postures, such as shoulder stand and the steps for head stand.

I was annoyed that I still couldn’t do locus posture or put my feet behind my head, but I also started to realise that yoga isn’t about being skinny and as flexible as a contortionist. It’s about loving your body, working with and respecting it, while also encouraging a happy, healthy relationship with every other aspect of your life.

I started to embrace the “crazy” yoga ideas of being one with yourself, and I found that my life became much, much less stressful. And the only change I made was attending yoga a few times each week.

During summer 2011 my university’s fitness centre closed for remodelling, and I simply couldn’t afford yoga classes – or a gym membership – anywhere else. Fitness in London can be expensive and I was unemployed. I decided try running outdoors, coupled with yoga at home. 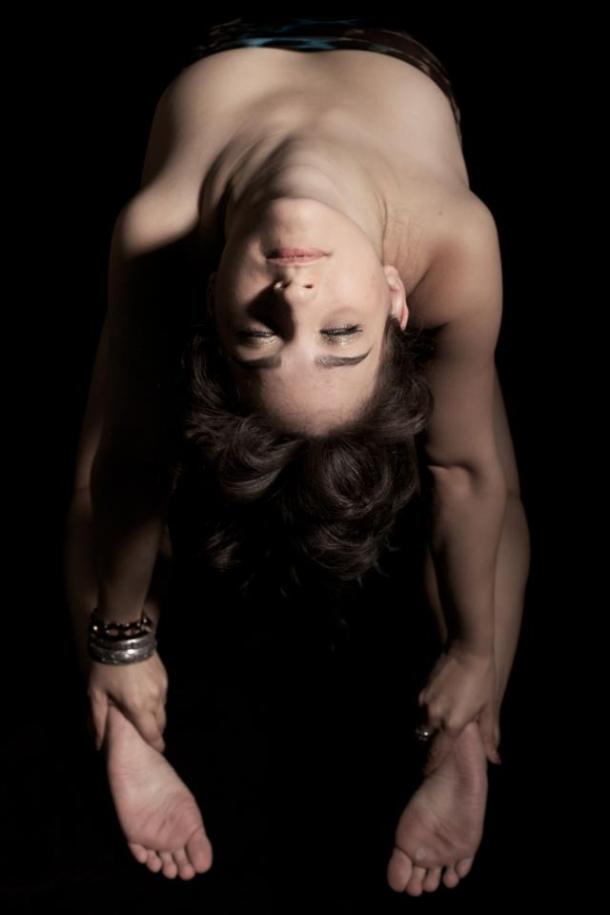 Turning up the heat

About six months ago I conceded that I didn’t love running as much as I’d hoped. I also realised how much I missed community yoga classes. I’d recently got a job so I looked for drop in studios, but all I could find were Bikram studios.

Bikram yoga is hatha style (which I like) performed in a heated room (which I wasn’t too crazy about). But I was still fixated on weight loss and had heard that Bikram was great for aiding weight loss. I really, really wanted to get back to my yoga practice, so I went for it.

After six months at two different studios in London I was absolutely amazed by the results. Changes in my breathing, in my stress levels, how I handle difficult situations and even a better quality of sleep. That, and I lost 4 inches off my waist in that time, along with much, much more flexibility than I thought my body would ever have.

The heat is definitely a challenge, as is keeping properly hydrated for classes, and I’m not the biggest fan of always doing the same 26 postures in every single class. I miss the inverted postures and I wish Bikram style allowed for hands-on corrections – I like the external reinforcement to know if my alignment is right or if I’ve adopted a funny posture. To satisfy some of these complaints I blagged my way into an advanced Bikram yoga class. While I did get to do shoulder stand, practice my head stand with a tutor’s advice and get exposed to a whole bunch of new postures, I just didn’t have the strength/flexibility to keep up during the class.

But then, I’ve got a lifetime of practice to master these postures – even though postures isn’t the point of yoga! – and I’m satisfied with how this practice has helped me manage my stress and anxiety, as well as maintaining a healthier weight than I’ve been in years.

2 thoughts on “Yoga for life”