This was my first experience at a Shake Shack, and after all the hype (in the media, from friends, etc.) I was expecting a whole lot more. Specifically, I was expecting burgers so deliciously addictive that I’d dream about them. Instead I left underwhelmed, and I’m not compelled to go back for more.

You see, the burger was good. Cooked well, tasty, a good texture; not too rare or runny, not overcooked or super chewy. It was just right. But it was boring. I’ve had dozens of burgers just like this one, which are nice to eat but not exceptional.

To be frank, this burger was “just nice” enough for it to be forgettable. 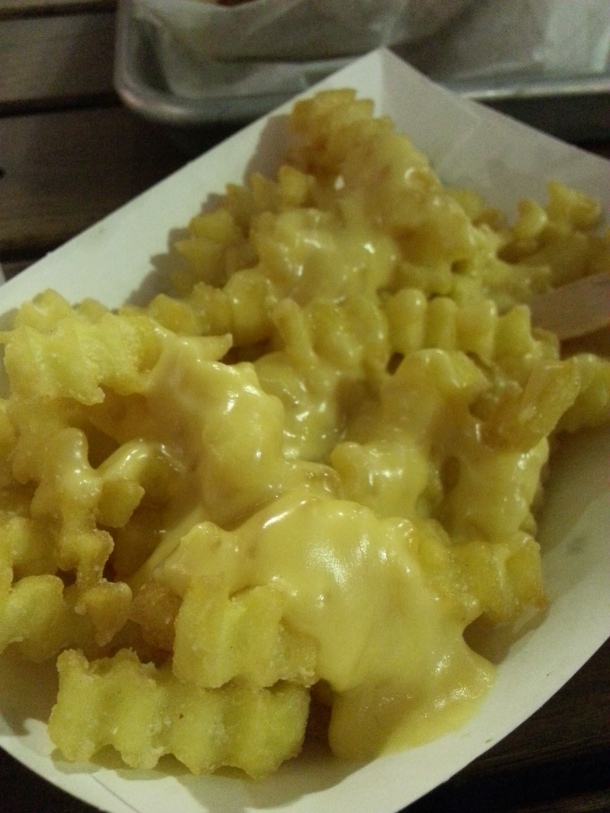 The fries (my fave food!) were nice and crispy. At first bite they were lush… but they went soggy as they got cold.

Jeff and I opted for the cheese (my second fave food!) on top, which was nice for the first few mouthfuls but then it got sickening. As the cheese got colder it began tasting worse and worse to the point where I didn’t want to keep eating the fires. And I *always* finish my fries!

The concrete! Turns out this is an American thing. Which this American has never heard of.

Surprisingly, the ice cream (or concrete as they call it – which a Shake Shack staff member told me was “an American thing”. However, I’m American and I’ve never heard of an ice cream called a concrete!) was the best part, but it was definitely not the best (or even one of the best) ice creams I’ve had. Jeff got a shake, which we both agreed was nice but not fantastic.

For the £25 meal we had (2 single Shack Burgers, 2 cheese fries, 1 shake, 1 single concrete/ice cream), I was really hoping for nicer seating (hard wooden folding chairs and garden style tables) and maybe some heating. It’s alright for the summer, but I suspect it will be less than desirable in winter.

Expect to queue for 20 minutes before ordering!

Overall, I’d have to say Shake Shack was good, but not great. Wonderfully mediocre. You can expect a good burger, good fries, good shakes and good pudding. But you won’t be feverishly planning your next visit on your way out…

Have you been to Shake Shack yet? What did you think of it?