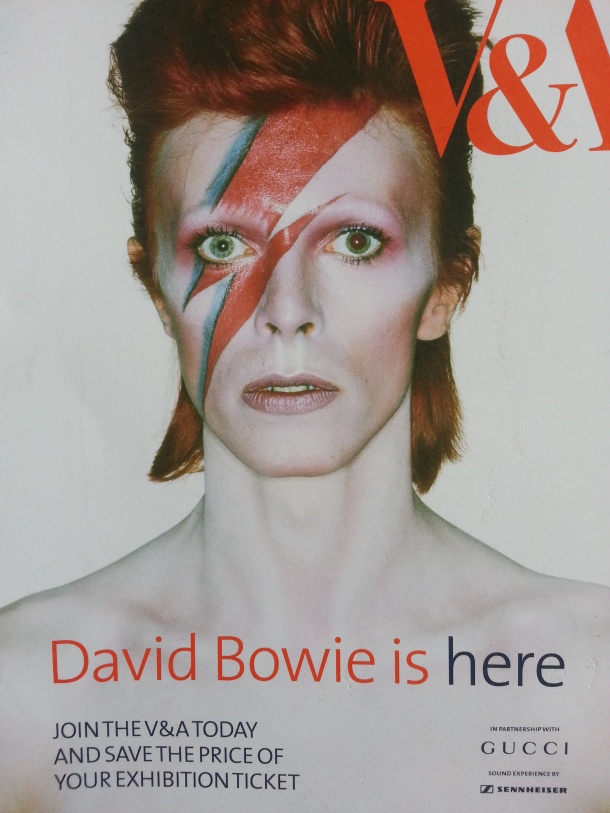 David Bowie is at the V&A.

Growing up, David Bowie is one artist I took for granted and never really explored. I’d hear his music on the radio and at home, I knew the songs and many of the lyrics. But much like Pink Floyd and The Beatles, his music was my parents’ music. I knew it, I enjoyed it, but I wasn’t really inspired to learn more about him. To be honest, I just didn’t give any of those artists – or the other musicians and bands my parents enjoyed – much thought.

But David Bowie is at the V&A, and Friday night I visited the exhibit with some of the other Google Local London crew.  I thought it’d be a good opportunity to learn more about some of the music I grew up hearing in the background. What I didn’t expect was that I’d develop a new-found respect for the man, be inspired to buy all of his albums (I can’t afford this right now, but I will do in the next few paycheques!) and see just how much his career has influenced today’s pop culture.

The exhibit is set up so that his creations (music, clips from his acting career, costume collaborations, artwork, etc.) are juxtaposed with pieces that have influenced him (photographs of musicians, books, artworks, etc.) and complimented with video interviews of people who’ve worked with him. It really packs a punch, and gives you a comprehensive idea of who he was and has become as both an artist and a person. 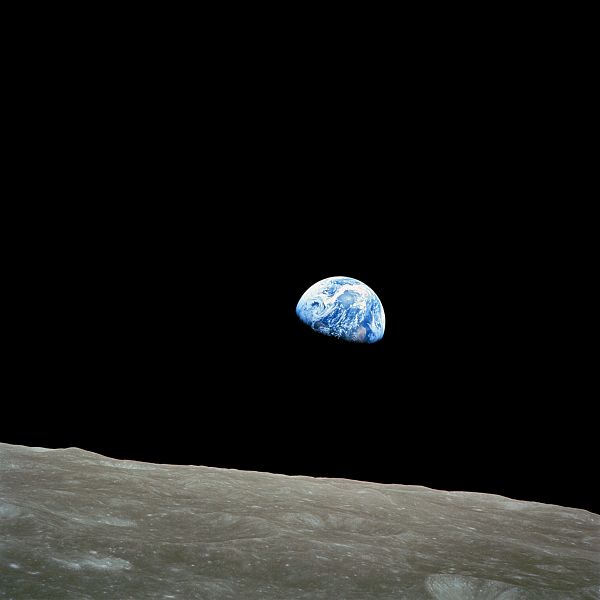 Earth from the moon by William Anders, NASA, 1968. Photo taken from Wikipedia.

One of the retrospective highlights was a music video display of Space Oddity next to a photograph of the earth from the moon taken by NASA’s William Anders in 1968. Oh, and the fact that the BBC had played this song in the background of their coverage of the Apollo 11 landing. For those of us not from the UK (i.e.: me) this kind of thing is just unthinkable. Why on earth would the BBC play a song about a man getting suspended in space while covering the Apollo 11 landing? Isn’t that just horribly insensitive? I think this may be the kind of thing that would only happen in England, because in a weird way it does make sense that they’d want to link pop culture with a major historical event.

If you visit, give yourself at least 90 minutes to work your way through the exhibit because there’s just so much to see and read. And in the final room you’ll want to spend at least 15 of those minutes watching  David Bowie performances projected at 5x life size. It’s incredible, and completely worth it.

David Bowie is on till 11 August at the V&A, online tickets have sold out but new tickets will be released each day at the Ticket Desk at 10am.

Commander Chris Hadfield returns to earth today and signed off from the International Space Station with a cover of Bowie’s Space Oddity. It’s absolutely brilliant.